AngularJS and KnockoutJS are JavaScript libraries that help create rich and responsive web UI interactions. KnockoutJS is a library that connects parts of the UI to a data model using declarative bindings. The same can be said about AngularJS, which is where the confusion comes from. The fundamental difference between the two solutions is that AngularJS manages the whole application and defines guidelines on how the application code should be structured, whereas with KnockoutJS the application structure is entirely up to you.

Library - a collection of functions used to write web apps. Your code is in charge, and it references the library when it needs to.

Framework - a particular implementation of a web application, where code fills in the details. The framework is in charge, and it references your code when it needs something app specific.

Let’s compare features that are similar and review how they differ.

Data Binding is the process of establishing a connection between the application UI and the business logic. If the settings and notifications are configured correctly, the data reflects changes made in the UI. This also means that when the data is changed, the UI will represent that change.

Let’s take a look at data binding process for both libraries. We will assume that our underlying data model is:

In order to perform two way binding using KnockoutJS we need to replace the model properties with a ko.observable wrapper:

Let’s see how to declare and apply bindings in HTML using the two technologies: 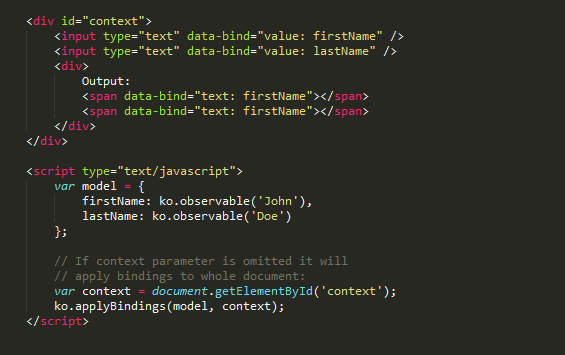 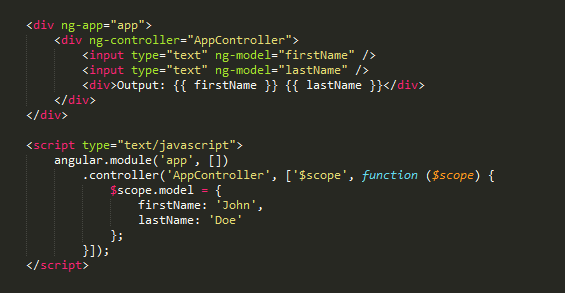 Let’s analyze the differences. In the HTML syntax for Knockout everything is done using the data-bind attribute and appropriate binding type; however, the need to specify all properties as observable requires additional effort. Mappings need to be performed when loading JSON data from the server to convert properties to observables. There is a mapping plugin that can be used to make this easier, but it is your responsibility to manage the mapping when retrieving data and when sending data back to the server.

Angular syntax for outputting values is much simpler and compact. It makes it easier to read and compose. The major difference is the binding methodology. Where Knockout binds to the provided model, Angular binds to the special $scope object.

Additionally, Knockout can only apply bindings once. If you try to apply bindings again it will throw an error. In Angular, however, scopes can be nested. This approach makes Angular views and controllers independent and reusable, and as a result, they can be tested independently. An example of this nested approach is shown below: 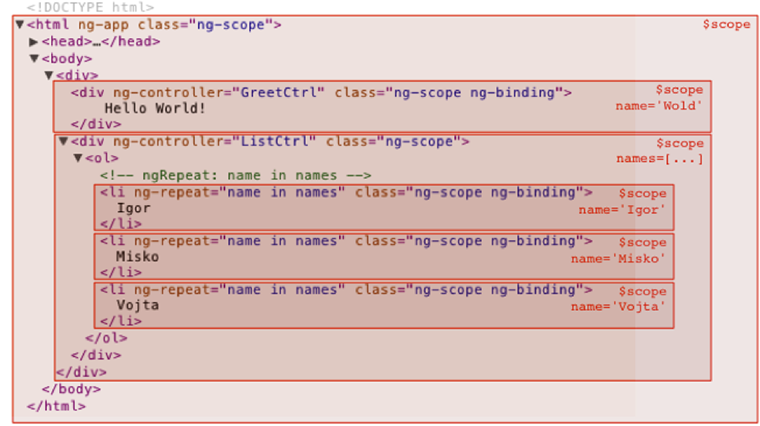 Angular is superior in that it allows templates to be stored in external HTML files and loaded dynamically. This results in better organization and maintenance of template code. All we need to do is provide the template URL:

With both technologies you are not limited to built-in functionality. Angular allows you to extend the HTML vocabulary of your application. The resulting environment is extraordinarily expressive, readable, and quick to develop. Angular uses a concept of Directives which allows you to attach a specific behavior to the DOM elements or transform it:

Equivalent functionality can be implemented in Knockout by writing custom bindings.

Both libraries come with built-in directives and bindings, and although these examples are very basic, they show how each library can be extended to be more sophisticated.

Because Angular works with plain objects, it observes variables using a dirty checking technique. Every time an expression is evaluated it compares current object values with previous object values.

It would be fair to say that Knockout can only be compared to a subset of Angular features. Angular is a more extensive framework, and includes the following additional features:

When working with Knockout, this functionality is not available in the core library, but can be added by using external libraries or custom logic.

Routing is a great feature that allows management of application states. and back/forward browser history navigation. Knockout does not support routing.

States are bound to named, nested and parallel views allowing you to manage your application's interfaces with ease. Additionally, states can be nested within each other.

Below is a sample Angular routing setup: 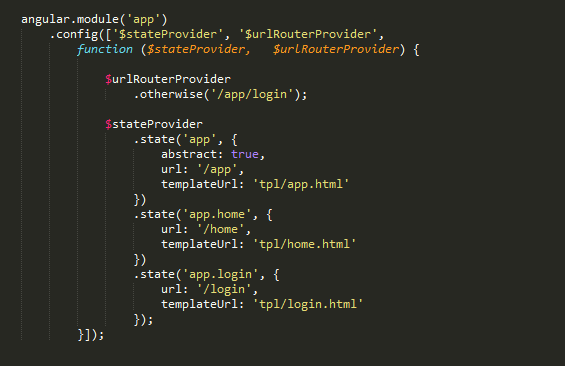 Angular is written with testability in mind, but it still requires some additional effort to integrate a test framework.

Knockout apps can be tested using similar methodologies, however, Knockout does not inherently result in testable code.

AngularJS 2.0 will include capabilities from the ECMAScript 6 JavaScript specification, including an improved syntax for classes, modular loading system for code, and annotations for declaratively describing the purpose of a class.

Knockout documentation for data binding syntax is extensive. Utility methods provided by the library are almost not existent.

Angular documentation is very well organized and has tons of information including interactive examples. The learning curve is steeper for Angular, as the library is much more conceptual and wider in application.

Angular seems to be more widely adopted with a broader user base. The table below shows some interesting ecosystem statistics:

Knockout has a low barrier of entry, but is also harder to manage when code base and complexity grows. It is not easy to build the necessary infrastructure correctly, and poor decisions made in structuring code may cost a lot to fix in the future.

Angular’s ability to bind directly to plain objects, modular structure, and strict development guidelines prevent many issues right from the start, and provide a strong architectural foundation for the application.

Think of it this way: Knockout is primarily used to control UI representation in lower complexity applications, whereas Angular is a JavaScript framework that is much better suited for large, complex enterprise applications. It provides not only UI binding, but also best practices for application structure, development and testing.