Angular development and maintenance projects require a lot of effort—especially when inheriting an existing application with elements needing improvement, and you weren’t on the original build team. The agile development team inevitably inherits the pre-existing conditions (aka technical debt) and the decisions made by the original build team. As a developer, how can you fix the technical debt and speed up Angular development? If the primary goal is to create new features, you don't always have the luxury to rewrite the whole application from scratch.

Regardless of the ask, starting point, or current state, there’s always an opportunity to tackle debt issues and improve development speed. Apps should continuously evolve and adapt to remain viable. In this article, I’ll share the steps our team took to speed up the development of an existing application.

To start, we evaluated the current state of the product, specifically that continuous integration best practices were in place. We found that continuous integration with an automated pull request (PR) builds, all repositories, deployment pipelines were already set up in Azure DevOps. At first glance, the configurations looked decent and well prepared for product development. However, upon further review, we found the system featured many builds (e.g., automated PR builds, commits to feature/* branches trigger individual builds, once PR merged to RC/develop branches separate builds started as well) performing at a slower pace than expected. While we didn’t want to reduce the number of builds, we did want to fix the time for the individual builds.

While overall the continuous integration was well prepared, builds were taking around 20 minutes. The unit tests and the npm package install build steps were a bottleneck in our pipelines. The time spent building code before it was ready to be deployed was taking too long. It was clear that we needed to improve the unit tests and npm cache’s performance.

Unit tests are supposed to be cheap and run fast. This was not the case for our team. For example, a unit test step in the build pipeline with around 500 tests ran 5 to 6 minutes on the build machine (~4 minutes tests run itself).

On the local machine, the same suite of tests took 2 to 3 minutes.

Those are huge numbers that got progressively worse with new tests added. After further investigation, we spotted two big testing issues.

TO FIX THE PROBLEM: Avoid modules like in this manner and inject/mock only required dependencies for each specific service/component or whatever aspect needing testing.

Rewriting all the tests required a lot of effort—especially for a project with a high number of tests. We determined that sorting test files by file size and refactoring the biggest ones would take too long. To figure out what tests to rewrite, we opted to log the execution time/test.

To log tests by execution time, we installed a karma-spec-reporter library and configured it in a karma.conf.js file. Once set up, we identified and addressed the slowest tests.

In terms of time and resources, we allocated 1 day and 1 engineer to fix as many unit tests as possible to improve performance speed. We removed all “TestingCommonModule” usages that didn't require a lot of effort and rewrote the setup for the slowest test suites using a ng-bullet library.

The nicest part, configuring everything was easy.

As a result, the test suite cached components instead of recompiling before every test run.

To achieve an even better performance, we ran unit tests in parallel with the karma-parallel. We installed the package and configured a karma.conf.js file.

After refactoring most of the tests, the unit test builds step reduced to 1 to 2 minutes (~25 seconds tests’ run) without parallel cores.

Unfortunately, the build machine running tests did not have many parallel cores and defaulted to a single core. 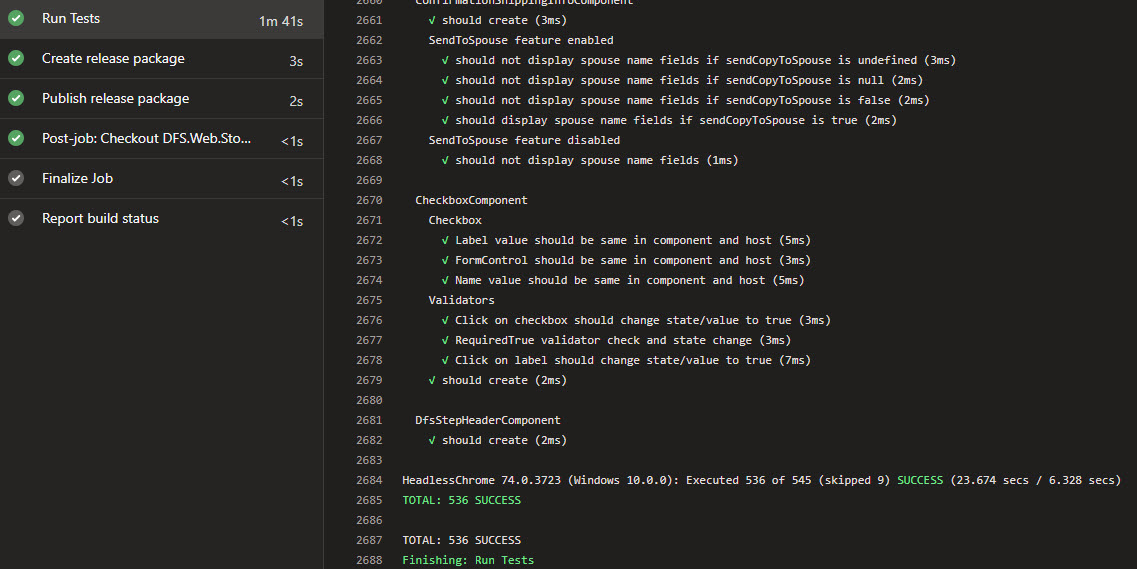 How to improve npm cache speed

Similar to a unit test, npm caches took too much time. Upon evaluation, we found that the npm package step took about 4 to 6 minutes. This was too long especially given the fact that package.json file did not change often. Reinstalling the same packages over and over again would be a waste of time.

Since the infrastructure used Azure DevOps, we decided to add an azure-pipelines-artifact-caching-tasks extension. We first ensured Azure Artifacts was enabled and created a new Azure Artifacts feed to store caches before installing the extension. Once fully set up, we added two build steps. 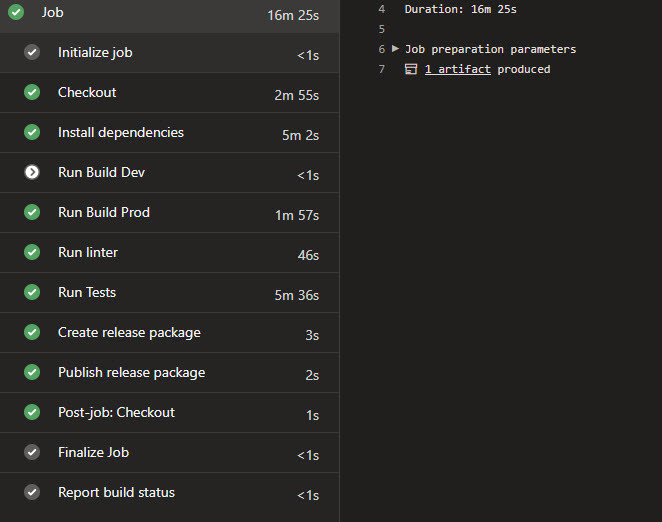 AFTER: ~8 minutes (including unit tests improvements) 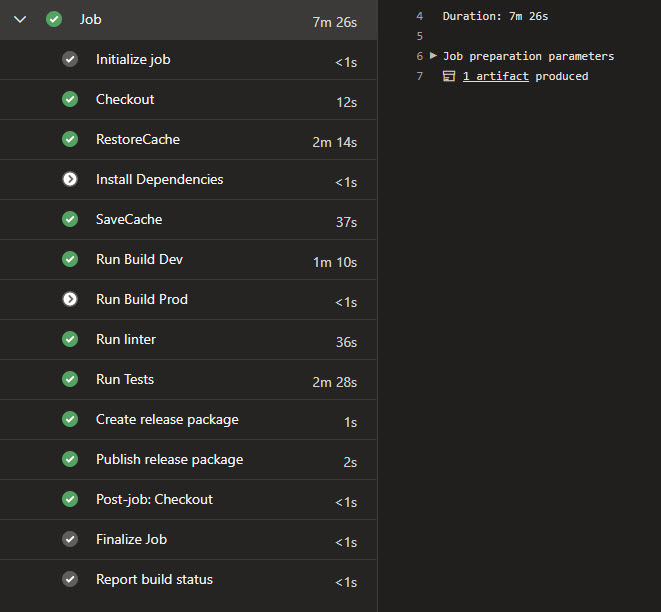 Usually, we averaged ~10 runs per day over an 8-hour period. Caching saved around 80 minutes every day.

NOTE: This particular Azure extension is suited more for UNIX based build agents. You could also set up Windows ones, but since it is executing tar functions, it could require more effort to fully prepare build agents. For the Linux ones, the extension works out of the box.

We reviewed the packages' list—including updating usages, checking the library’s functionality use, and removing unused libraries. We found that a few packages used for one simple function could be implemented easily by ourselves. We included the whole library for the simple functionality and used the code in just one place. Removing dead libraries from the code helped reduce the bundle size, speeds up the npm install process, and reduce dependencies in the application.

To resolve these issues, we took the following steps:

*For demo purposes, this example features modifications made to an input component.

1. We created form-component-base.ts for the essential logic needed for the form component.

3. We included input.component.html to wrap the kendoTextBox usage, which rendered kendo-UI input or a custom component depending on the need.

4. The usage resulted in an input.component.ts.

These four steps solved the wrapping component issues, keeping the team in sync, and ensuring consistent inputs across the whole application.

While git hooks seem like an essential element in the development world, not many teams use them. In fact, when we inherited the product, it didn’t feature a single git hook. We opted to introduce them to help maintain code quality by running tasks before executing git commands.

Our team established pre-push hooks to allow us to commit elements without any restrictions. Then, once opting to push, a pre-push hook kicked in and ran a set of commands. In our case, those commands validated code formatting and linting rules. For more details on git hook documentation, go here.

We used the following tools to set up git hooks quickly and easily.

NOTE: Tslint was in place, yet needed to use eslint because TSlint was already deprecated.

The image below shows how we set up the package.json.

The commands and configurations prevented developers from pushing code that didn’t meet our guidelines and rules. This setup helped save a lot of time during code reviews and spot code issues quickly. We didn’t waste time arguing about how the code should look. The code style was always being checked, which happened when pushing code. Instead, we focused on the implementation details. If the code style had any issues, they were fixed quickly with the help of the prettier library.

Too often, inheriting existing products is painful. If code quality is poor, it could demotivate the development team. However, it doesn’t have to be. Pinpointing and addressing technical debt inevitably ease the lives of those maintaining or working on the product. Taking the actions covered in this article made maintaining and improving the application easier for our team. We were able to deliver faster and less error-prone code to our clients.