TypeScript is a free and open source programming language that was developed by Microsoft. It is a superset of JavaScript, and essentially adds optional static typing and class-based object oriented programming to the language. Every JavaScript program is also a TypeScript program. One of the big benefits is to enable IDEs to provide a richer environment for spotting common errors as you type the code. For a large Javascript project, adopting TypeScript can result in more robust software while still being deployable where a regular JavaScript application can run.

There's CoffeeScript, but that serves a different purpose. CoffeeScript makes a lot of changes to JavaScript's syntax and uses JavaScript's object-oriented capabilities in a particular way, but doesn't fundamentally alter the way the language works.

There's also Dart from Google, but that's a full on replacement for Javascript. Dart's goals aren't identical to TypeScript's. Google thinks that some of the semantics of JavaScript are fundamentally problematic, so Dart changes these semantics. However, both Dart and TypeScript are designed to aid in large-scale application development using module systems and optional static type checking as the fundamental tools to support that, and both can be compiled to JavaScript.

The command-line TypeScript compiler can be installed as a Node.js package. To do that, first run Node.js and run:

Then you can compile TypeScript files with a command:

Visual Studio 2012 developers can install the TypeScript editor plugin to get rich TypeScript tooling inside Visual Studio. It is recommended to install the Web Essentials extension to get full support for TypeScript preview and compilation. ReSharper 8 from JetBrains is going to support TypeScript, too.

WebStorm/PhpStorm from version 6 introduces full support for the TypeScript language through the new Source Maps feature. I am going to talk about Source Maps a little bit later.

In the example below we have a piece of code in the TypeScript. It contains two classes: Person and Main. The first one has a constructor with an optional name parameter and a public method getName(). The other class Main uses a Person class and initiates two instances of it. Pay attention to the static Person.defaultName member, which is used if Person’s constructor is named without a name parameter. 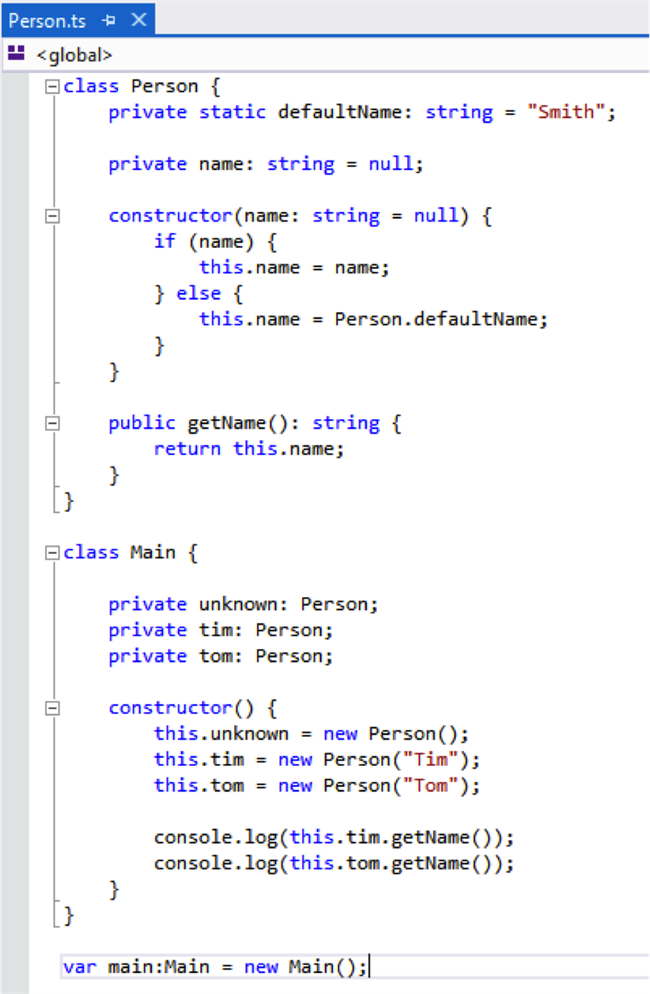 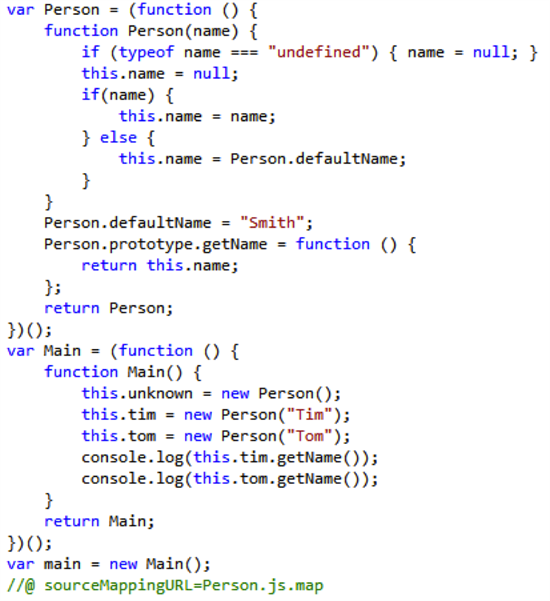 At the end of the generated file we see a //@ sourceMappingURL=Person.js.map comment. I will explain it a bit later.

Namespaces are introduced using the module keyword. By default, the internal stuff in a module is not made visible outside of the module. To make it visible we have to use the export keyword. 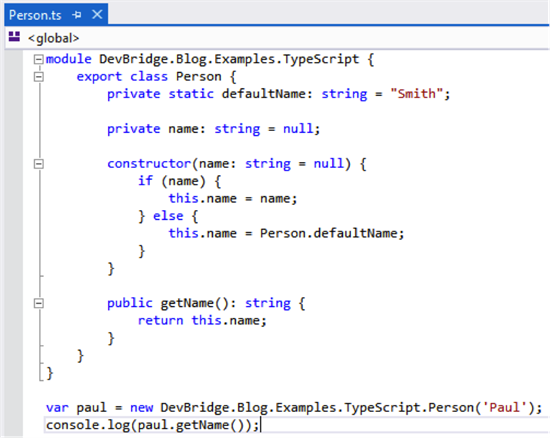 To access stuff in a remote TypeScript file, we first need to add a reference to it. The second thing we can do is to add an import statement to import internal or external modules and create local aliases by which they may be referenced: 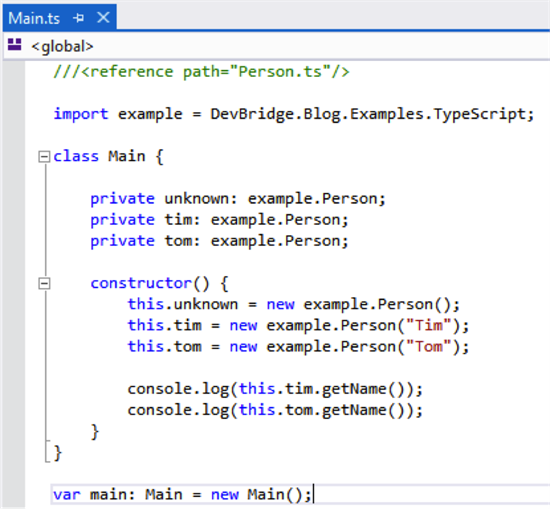 TypeScript adds optional static types to JavaScript. Types are used to place static constraints on program entities such as functions, variables, and properties so that compilers and development tools can offer better verification and assistance during software development.

The any type is used to represent any JavaScript value. If we don’t specify a type for member or function its type is resolved as any type:

The primitive types are the Number, Boolean, String, Null, and Undefined types. Let the code speak: 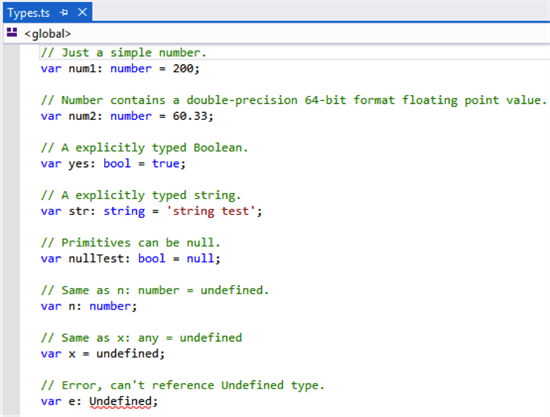 The void type, referenced by the void keyword, is used as the return type for functions that return no value. The only place the Void type may appear is in a return type annotation for a function.

Interfaces have no run-time representation in JavaScript. They are purely a compile-time construct. Interfaces are particularly useful for documenting and validating the required shape of properties, objects passed as parameters, and objects returned from functions. 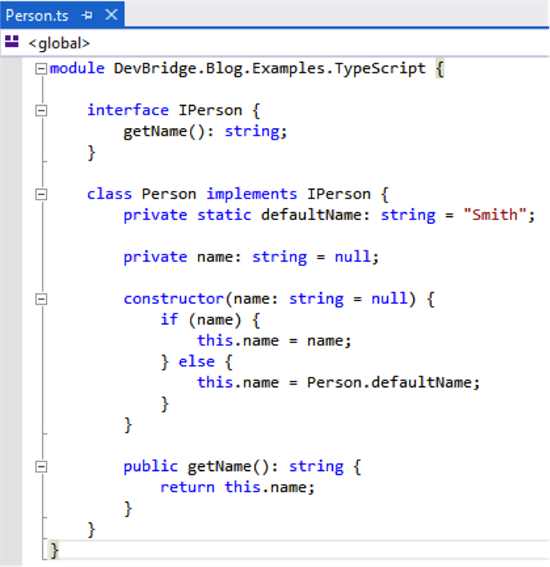 Class inheritance, as you are probably familiar with it, is not something you’d want to hand code in JavaScript. This is an area where TypeScript clearly shines brightly. In the example above, we already used the implements statement to implement the IPerson interface for the class Person. Now lets inherit a Person class in the Student class: 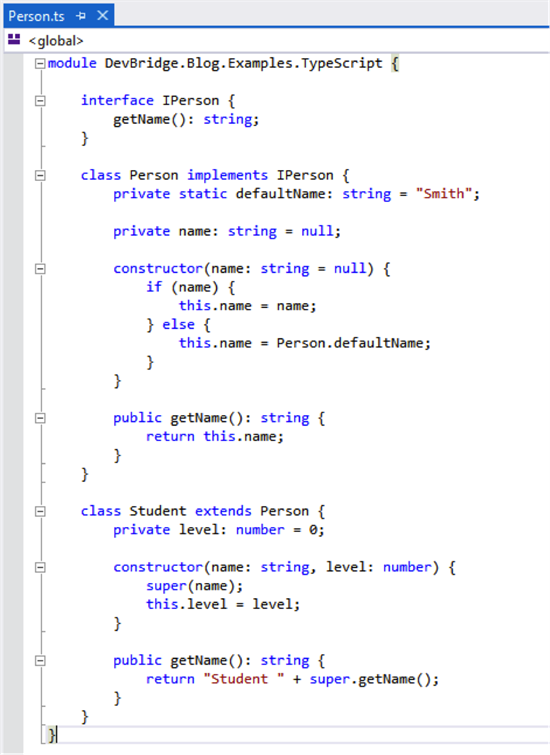 Below you will notice that there are two methods named Name. Notice the “get” and “set” in front of the methods. TypeScript Getters and Setters are called TypeScript Accessor. 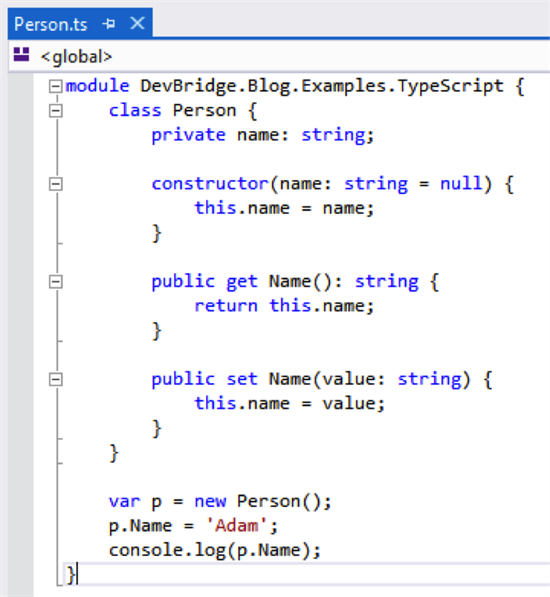 In TypeScript you can specify a default value for the constructor or method members: 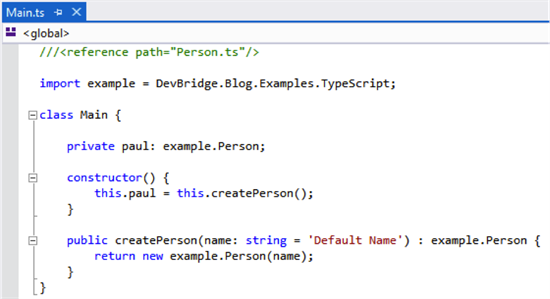 If you run a TypeScript enforced application with Internet Explorer, Visual Studio can do debugging right inside Visual Studio. 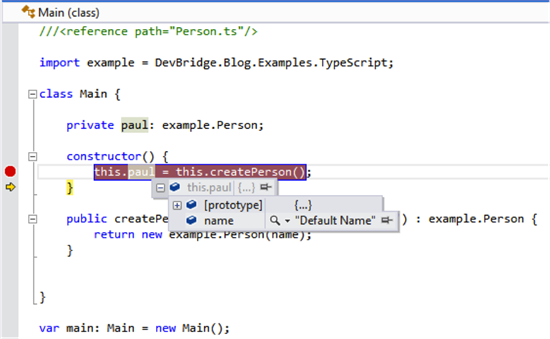 Debugging with other browsers

Have you heard of Source Maps? Source Maps is an idea that has come out of Mozilla for addressing the debugging issues that are raised by *-to-JavaScript compilers and JavaScript minifiers, the problem is that when you use these you ultimately aren't debugging what you wrote.

Now you need to enable the Source Map generation from the TypeScript file. First you need to compile the .ts file with the -sourcemap flag in order to generate a source map file.

In Visual Studio you need to go to Options → Web Essentials → TypeScript and set the Generate Source Map option to True. 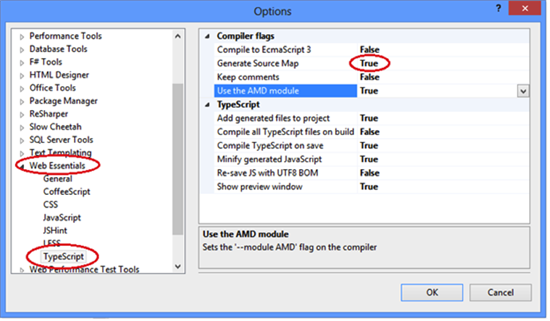 Now lets try to debug TypeScript in a Google Chrome browser. First, look at Sources - you should see your .ts file listen with .js files. Select your .ts file and add a breakpoint. Now refresh the page - your browser should hit the breakpoint: 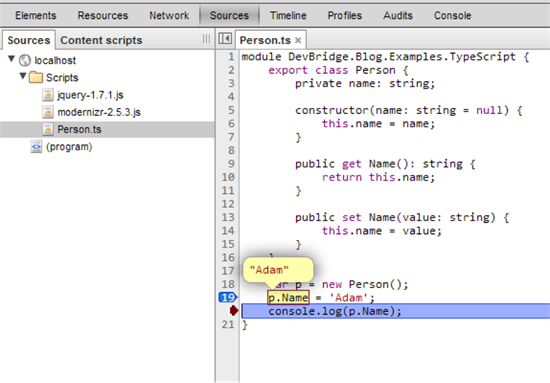 As you can see - we have a regular debugging experience here!

TypeScript offers classes, modules, and interfaces to help you build robust components. These features are available at development time and provide developers with the confidence that it will not break, but are compiled into simple JavaScript. This was a missing piece of JavaScript, which is fulfilled by TypeScript.

And one more thing...

The community has started collecting TypeScript type definitions for popular JavaScript libraries. These files (ending in .d.ts) describe the public api of an existing library, just like .h files do for C code. This allows you to write TypeScript code against JavaScript libraries without them having to change anything.

Installing TypeScript on a Mac