A poorly designed architecture is a major reason why test automation frameworks fail. Engineers need to identify problems and adopt the right design patterns upfront. Common factors that result in bad design are:

There is a fix. Take a moment to identify blockers or problems. Once the issues are identified, it’s easier for engineers to build maintainable, extendible frameworks.

When designing an application, developers need to solve problems along the way. There is a good chance that another developer already solved the exact same or similar problem already. Design patterns provide a general reusable solution for the common problems that occur in software design. Design patterns are like collections of best practices as they provide a concept but not particular implementations. Design patterns help reduce code complexity—as well as make code more extensible, and maintainable.

In this article, I’ll go over the most popular structural, creational, and behavioral design patterns, outlining what they are, why they’re useful, and how to structure them.

This is the most popular structural design pattern and is commonly used in building test automation frameworks to automate UI test cases. The pattern abstracts any page information away from the actual tests.

POM’s are beneficial because:

Page objects are like interfaces for web pages or web page components, also known as loadable components. These components support the same interaction with other web pages and should consist of: 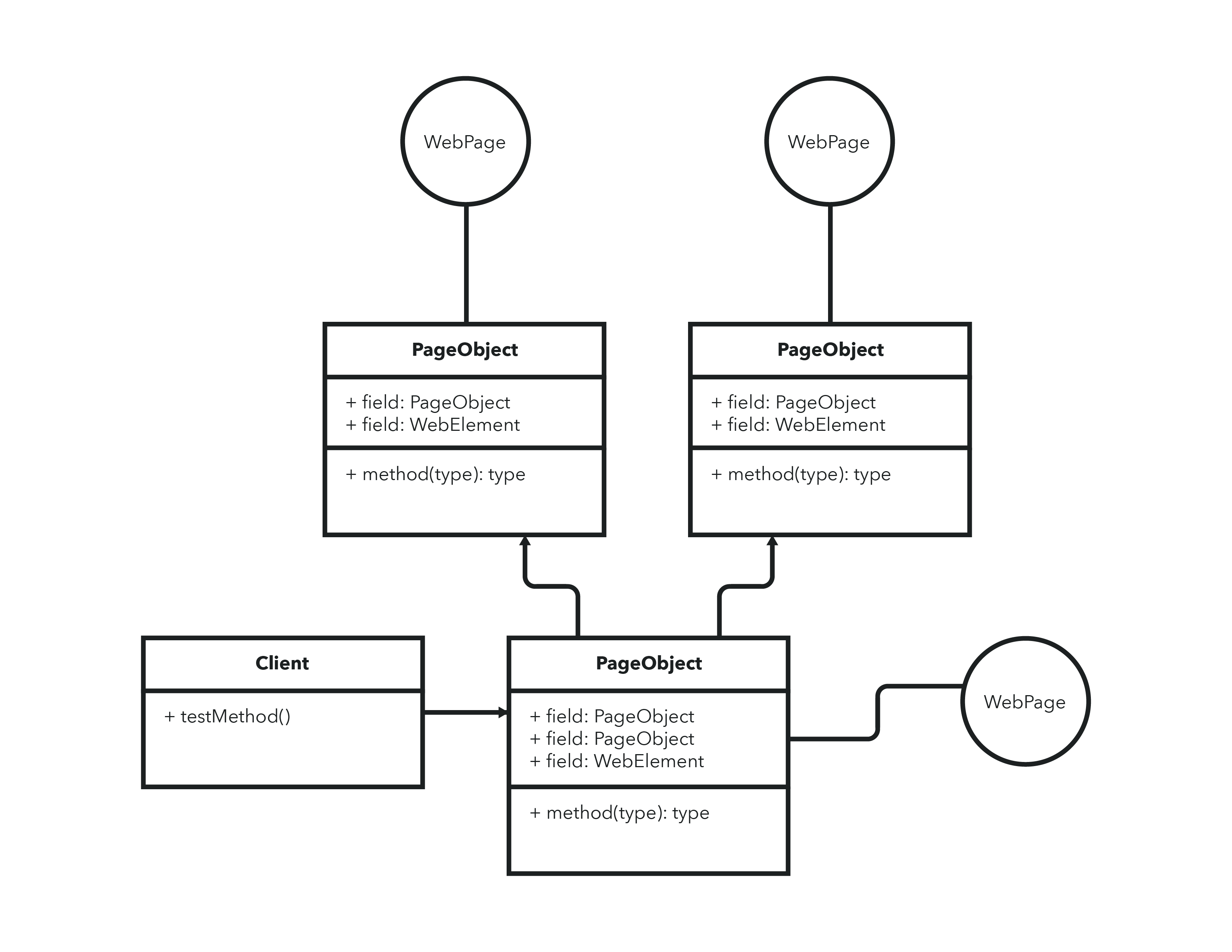 To implement POM effectively, follow a folder and file structure to organize and keep page objects easily accessible. Page objects can be implemented in a functional or structural manner, depending on the approach and need. 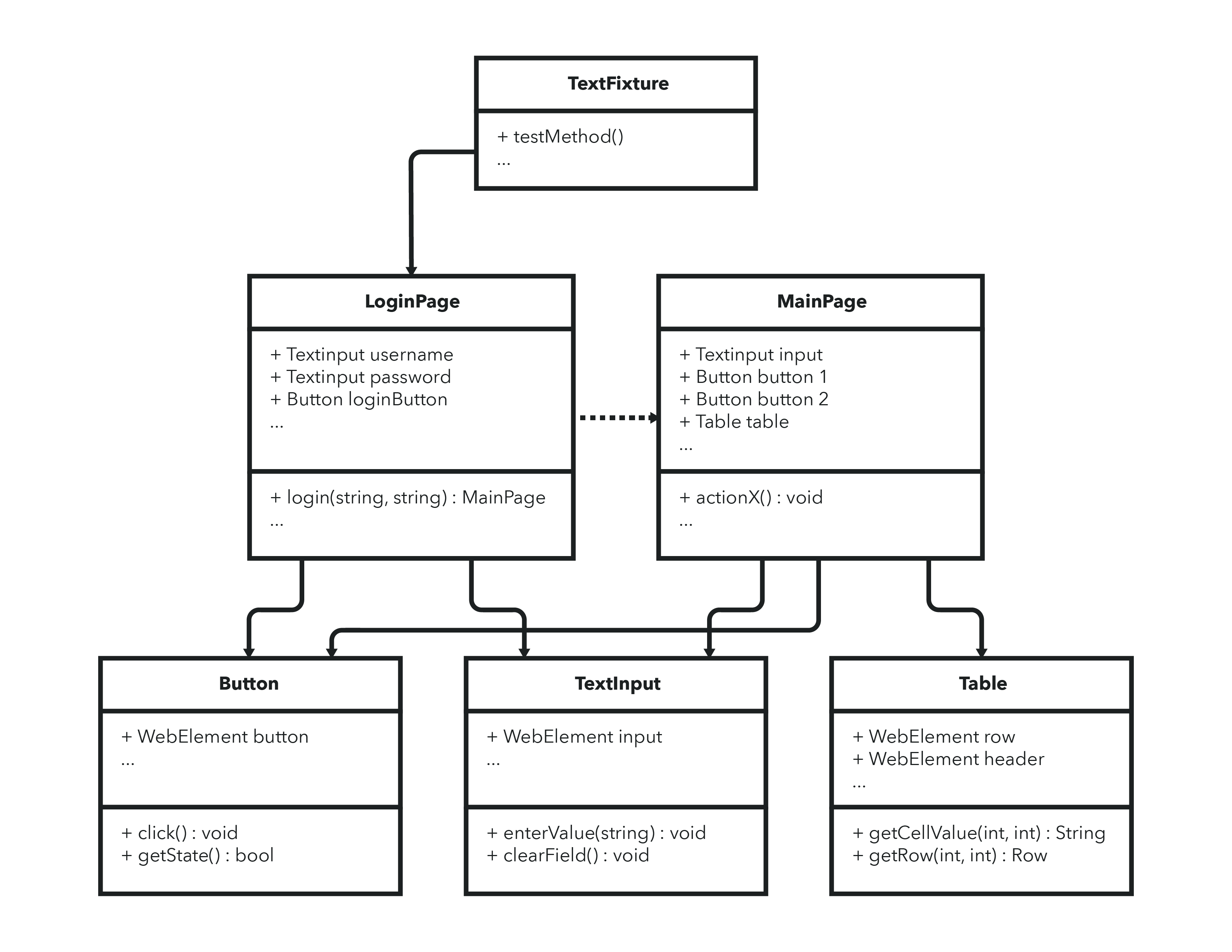 A composite pattern is beneficial because:

Composite patterns in automation solutions stem from a collection of page objects built up, forming a tree structure. While true, the main point of a composite pattern is to treat individual objects and compositions of objects uniformly. The structure gives the client control to operate through abstract the component interface. 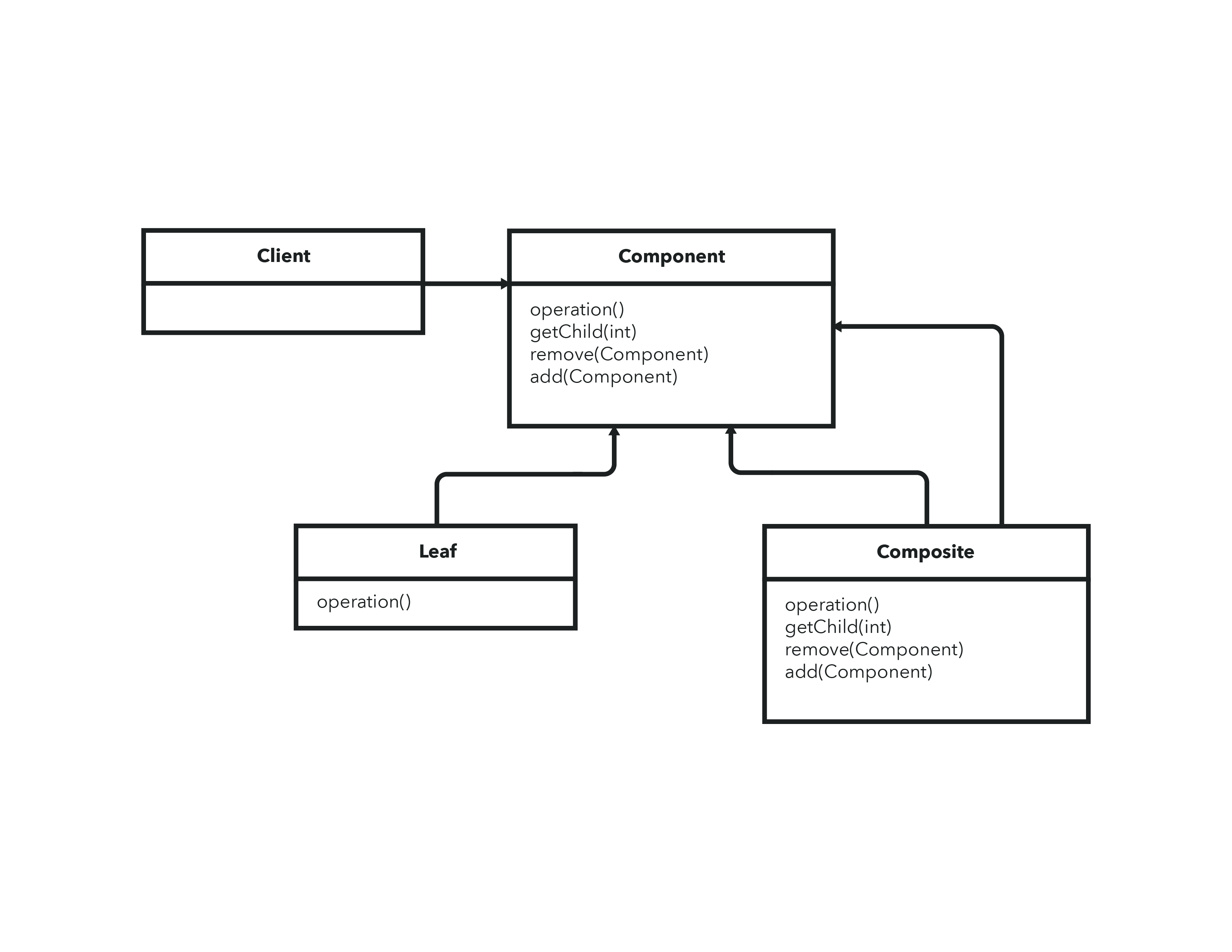 Engineers use a composite pattern to create components that benefit from a tree structure (e.g., menus needing sub-menus, sub-sub-menus, etc.) to get, select, or print all the items via recursion. For more complex needs, include custom iterators. 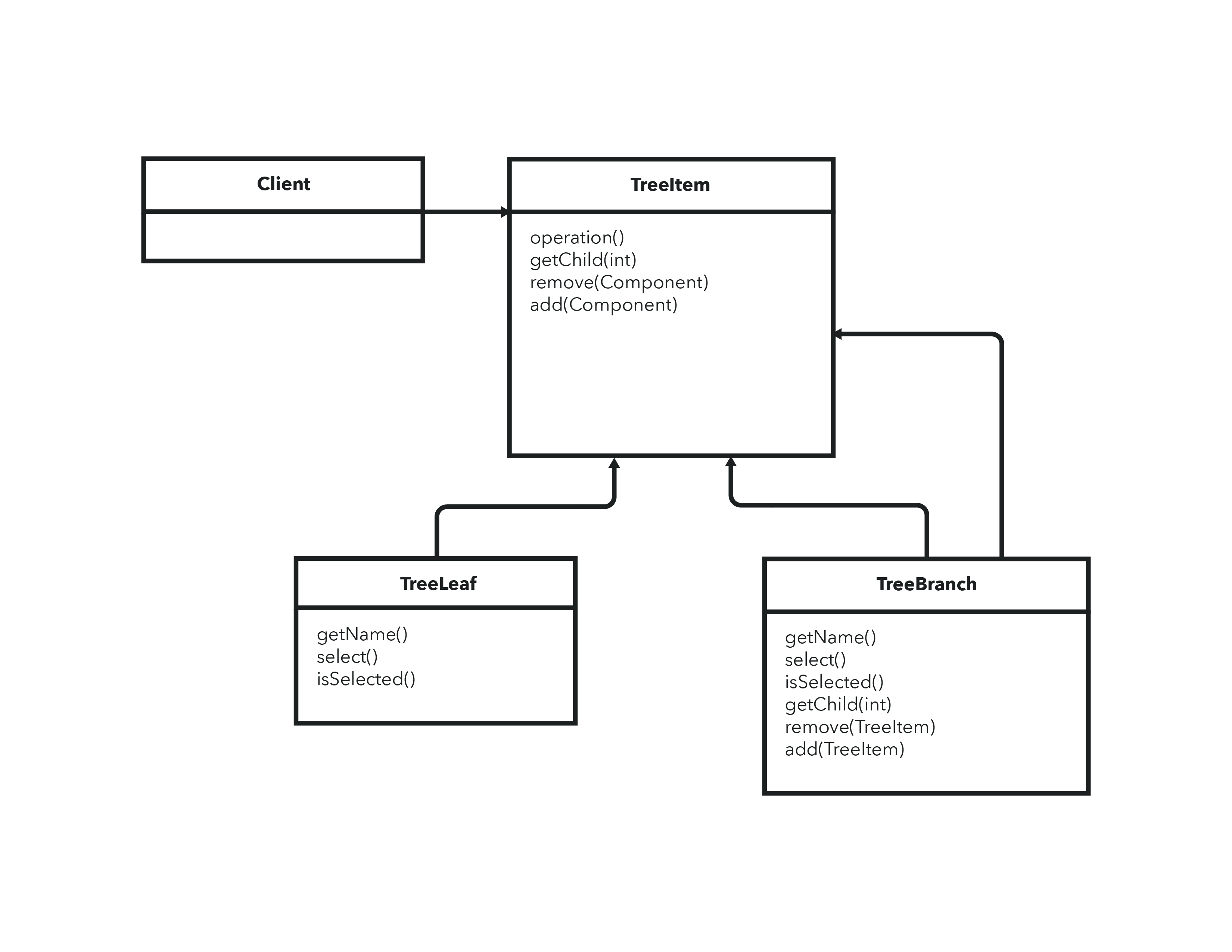 In the image above, the TreeItem could be implemented as an interface or as an abstract class (if one would like to add default methods implementation). TreeLeaf is a basic element with most of the time all the code “meat” lives in these elements and does not feature other elements. TreeBranches hold other TreeItems and delegate all the work to child elements (i.e., tree leaves).

The facade pattern provides a unified interface to a set of interfaces in a subsystem. The facade defines a higher-level interface that makes the subsystem easier to use.

Why are they used?

A façade pattern is beneficial because:

Facade is another structural design pattern that helps hide the complexity of one or more classes and provide one or more reasonable interfaces. The pattern still leaves direct access to the complex classes in case the user needs advanced functionality. Besides simplifying the interface, a facade pattern also decouples the client from inner system components. 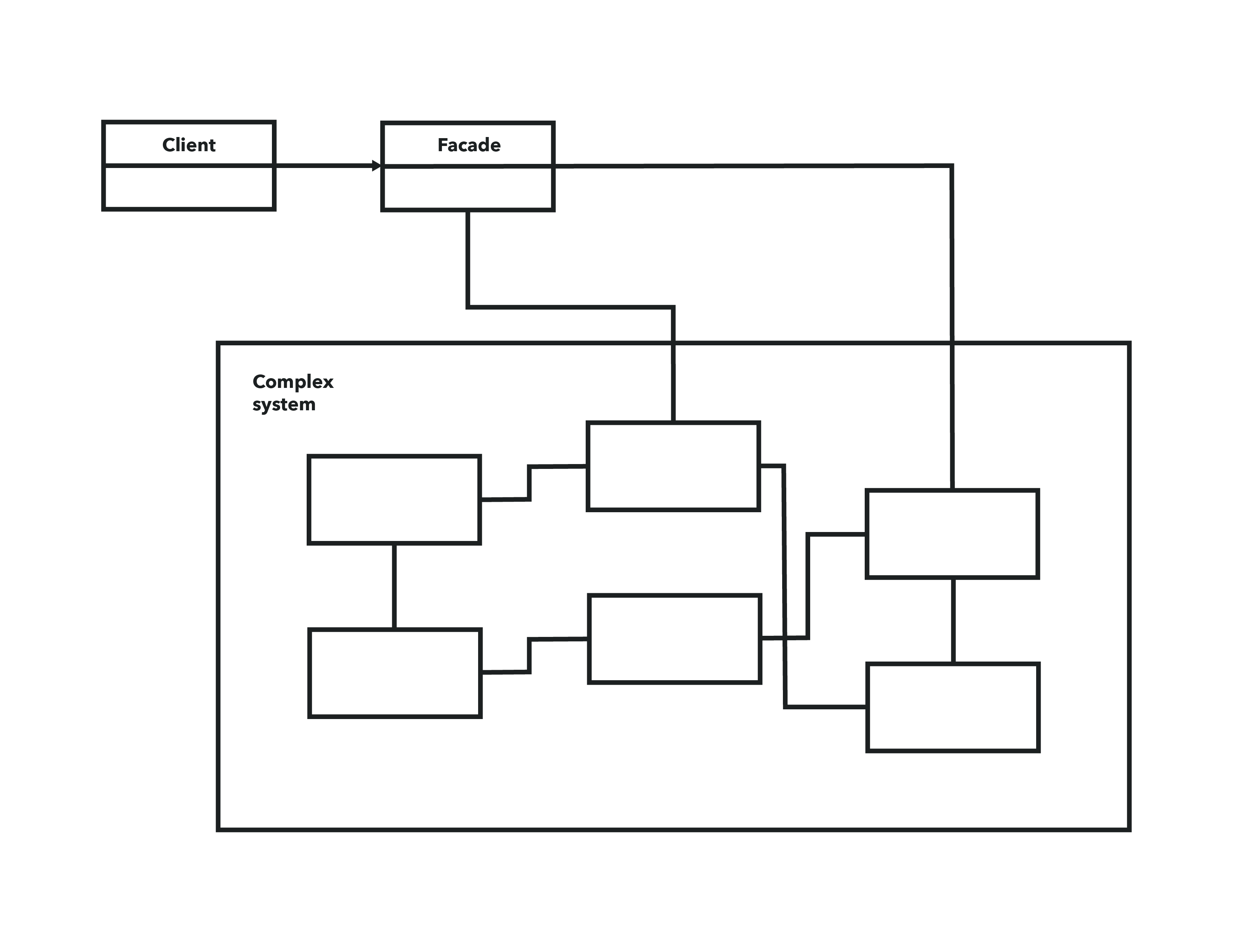 In test automation, a facade is mostly used to combine a few page objects/actions and provide uniform actions for consumers. For example, when a complex API needs to be executed in a specific order, create a facade for the designated functionality and provide a simplified interface for operating. 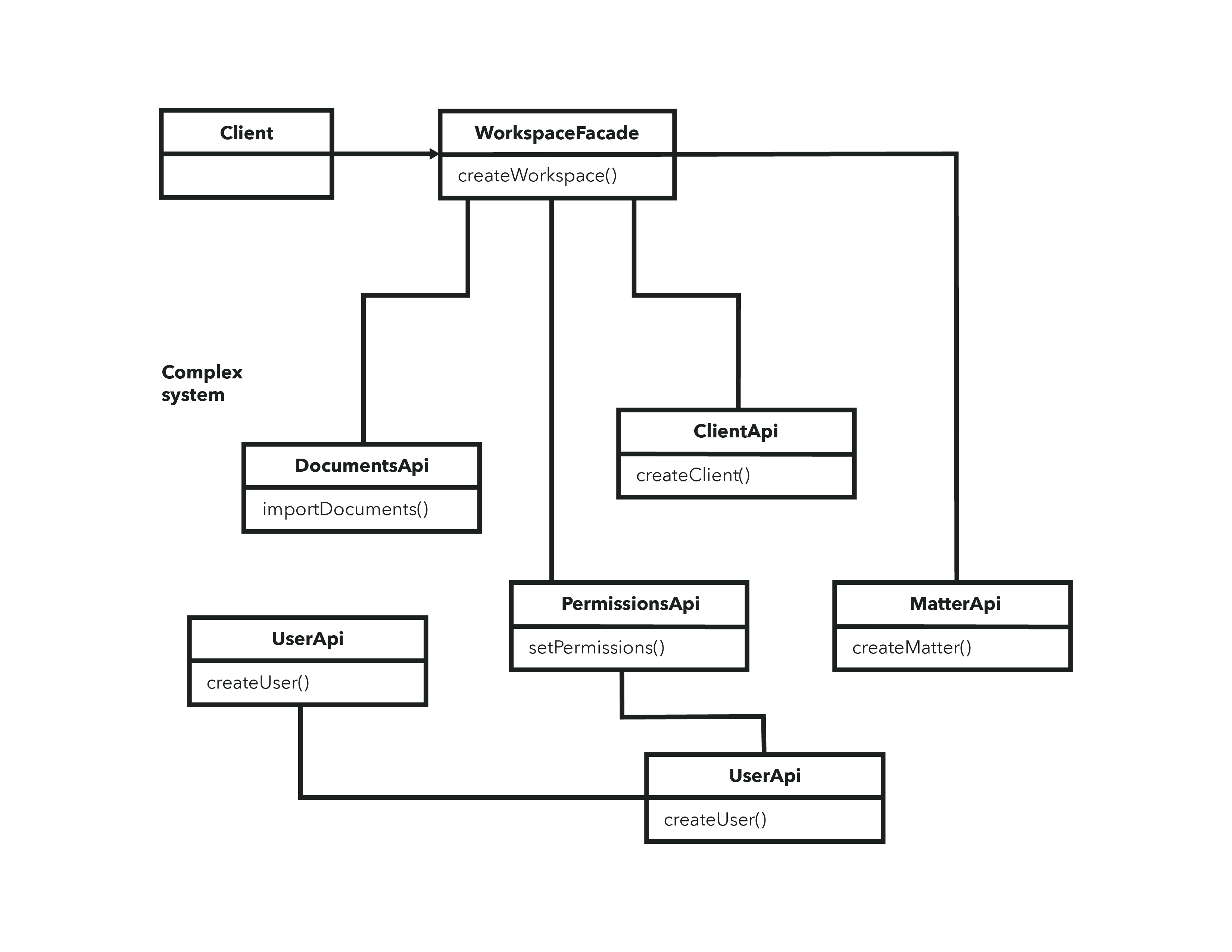 This pattern attaches additional responsibilities to an object dynamically. Decorators provide a flexible alternative to subclassing for extending functionality.

A decorator pattern is beneficial because: 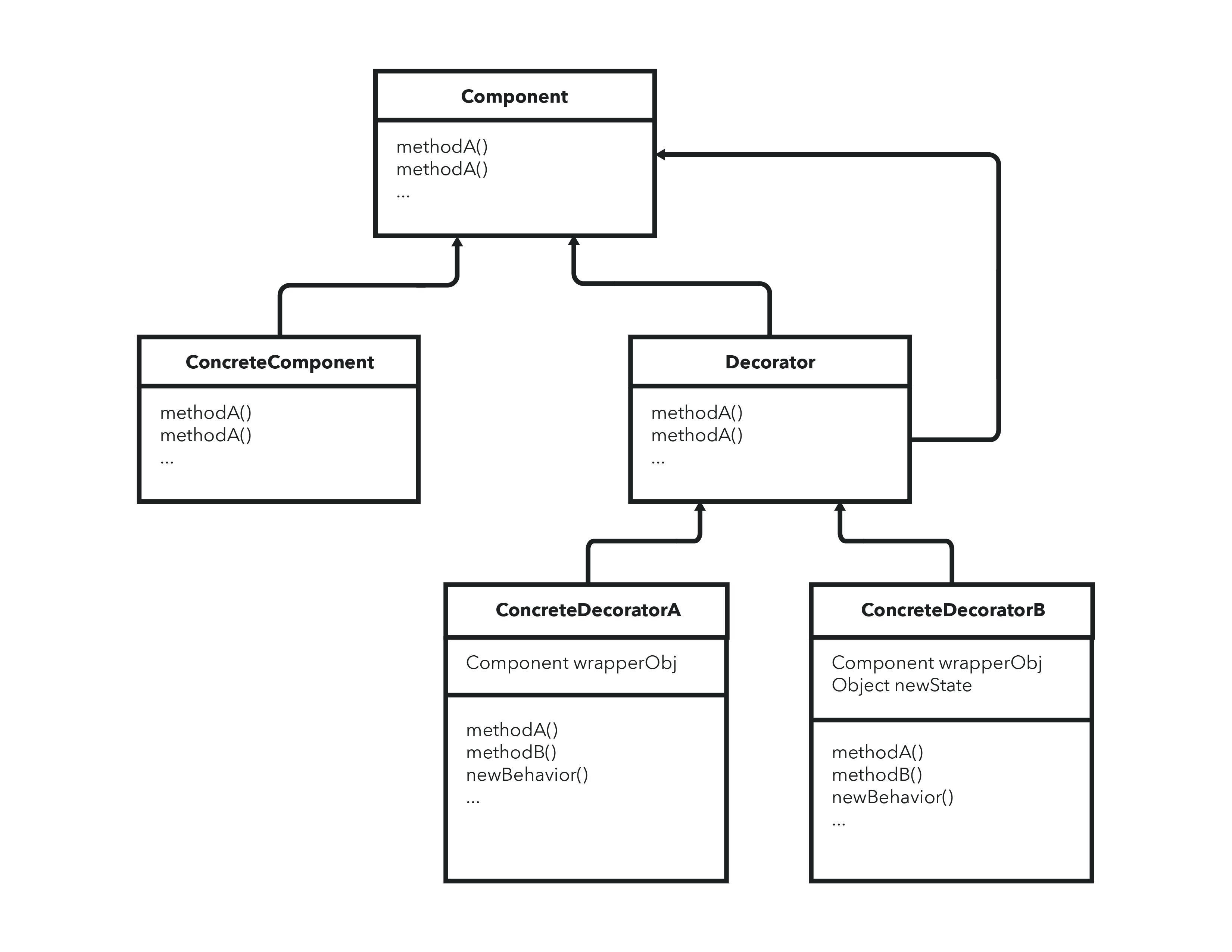 For example, to add logging functionality without a lot of changes to test automation solution using Webdriver, simply wrap (i.e., decorate) the Webdriver into EventFiringWebDriver. IWebdriver, IWebElement, INavigation, IOptions, ITargetLocator, and ITimeouts wrap with multiple new responsibilities. As a result, EventFiringWebDriver fires events on the main actions attached and listen to.

With EventFiringWebDriver implemented, engineers easily access screenshots and logging on every exception or other action. To assemble:

This pattern defines an interface for creating an object but allows subclasses to decide which class to instantiate. Factory methods let a class defer instantiation to subclasses.

A factory method pattern is beneficial because:

A factory method pattern is a creational pattern used for encapsulating the instantiation of concrete types, avoiding tight coupling between the creator and concrete products. Engineers don’t need to modify any code to extend the codebase. 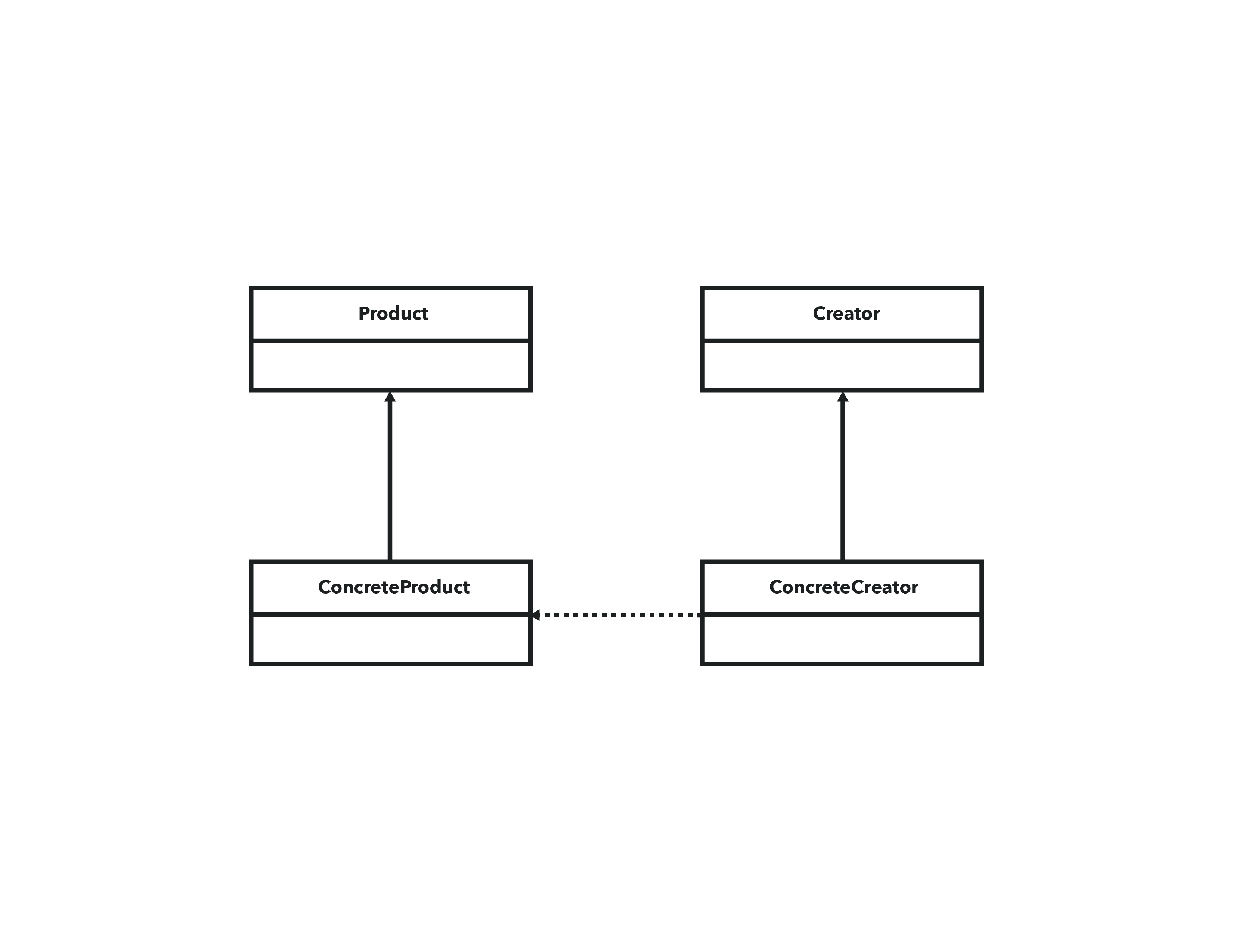 One of the best examples of a test automation framework is with the Selenium WebDriver initialization. While most of the initializations require some kind of setup afterward, when all Webdrivers share the same "IWebDriver" interface, refer Webdrivers through that interface. Adding another Webdriver (if necessary) is easy. Simply extend the factory method, which does not modify already existing code. 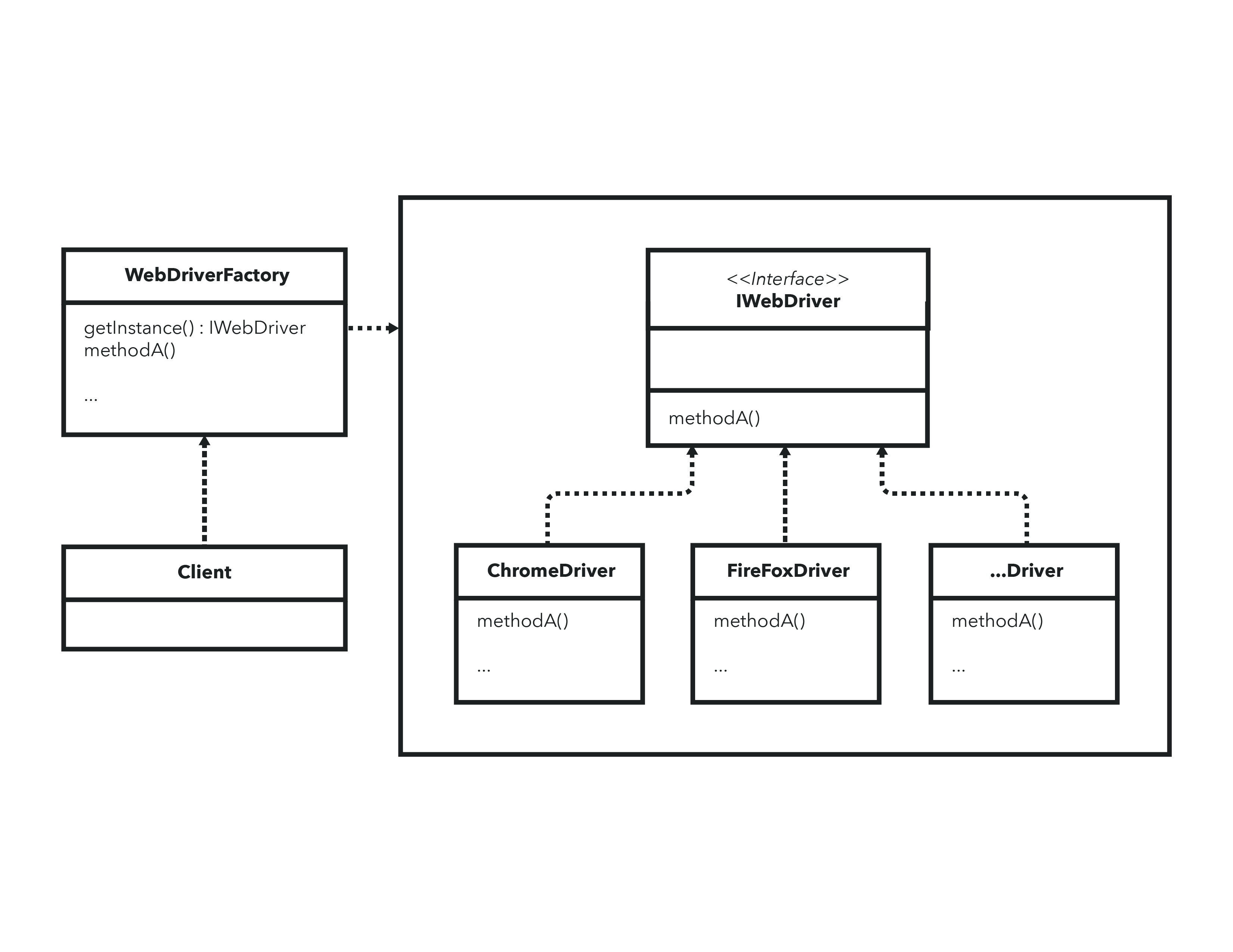 A builder pattern is beneficial because: 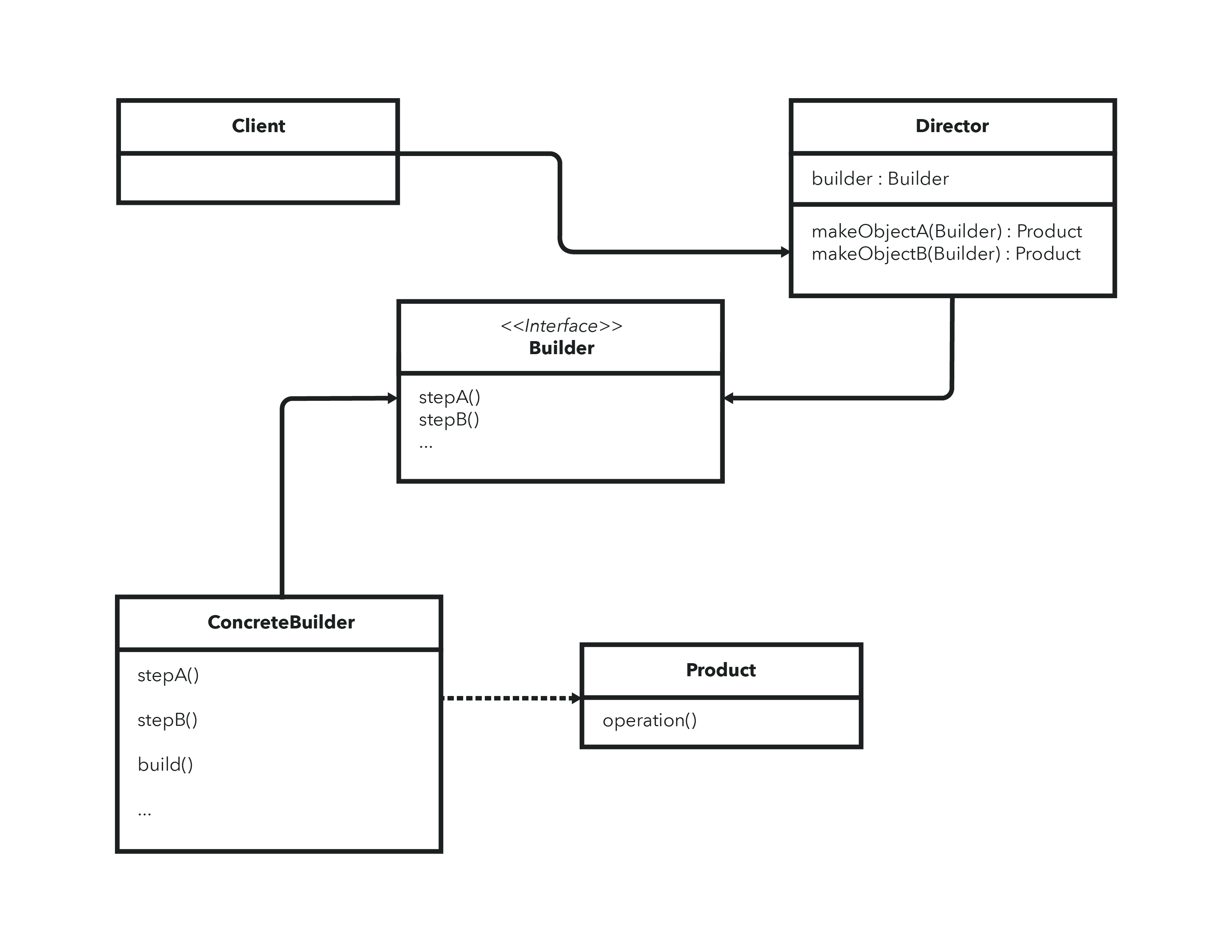 For example, when orchestrating a data transfer objects (DTO), like permissions for an object, with permissions such as read, create, update, and delete or any other object permission that needs to be built dynamically.

This pattern ensures a class has only one instance and provides a global point of access.

A singleton pattern is beneficial because: 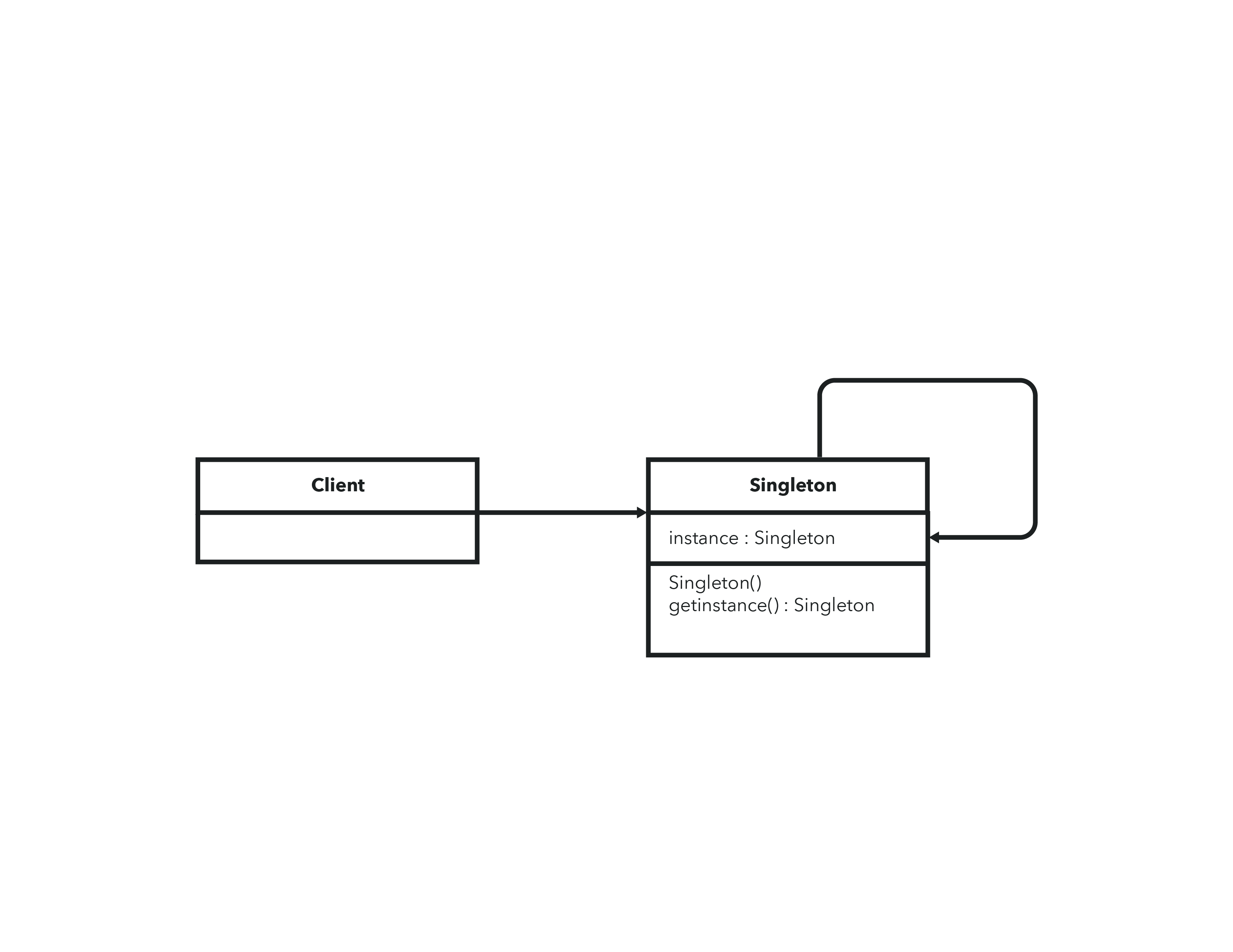 This pattern defines a family of algorithms, encapsulates each one, and makes them interchangeable. Strategy patterns let the algorithm vary independently from the clients that use it.

Why are they used?

A strategy pattern is beneficial because:

In test automation, strategy patterns are useful in various fields. For example, an application includes multiple payment methods on a checkout page or a different implementation on the same action, like account creation. One pattern uses UI, and another uses RESTful calls.

These algorithms (strategies) are easily defined, encapsulated, and used for various needs. Engineers take all the logic from page objects and lets page objects delegate all the work to the strategy objects. 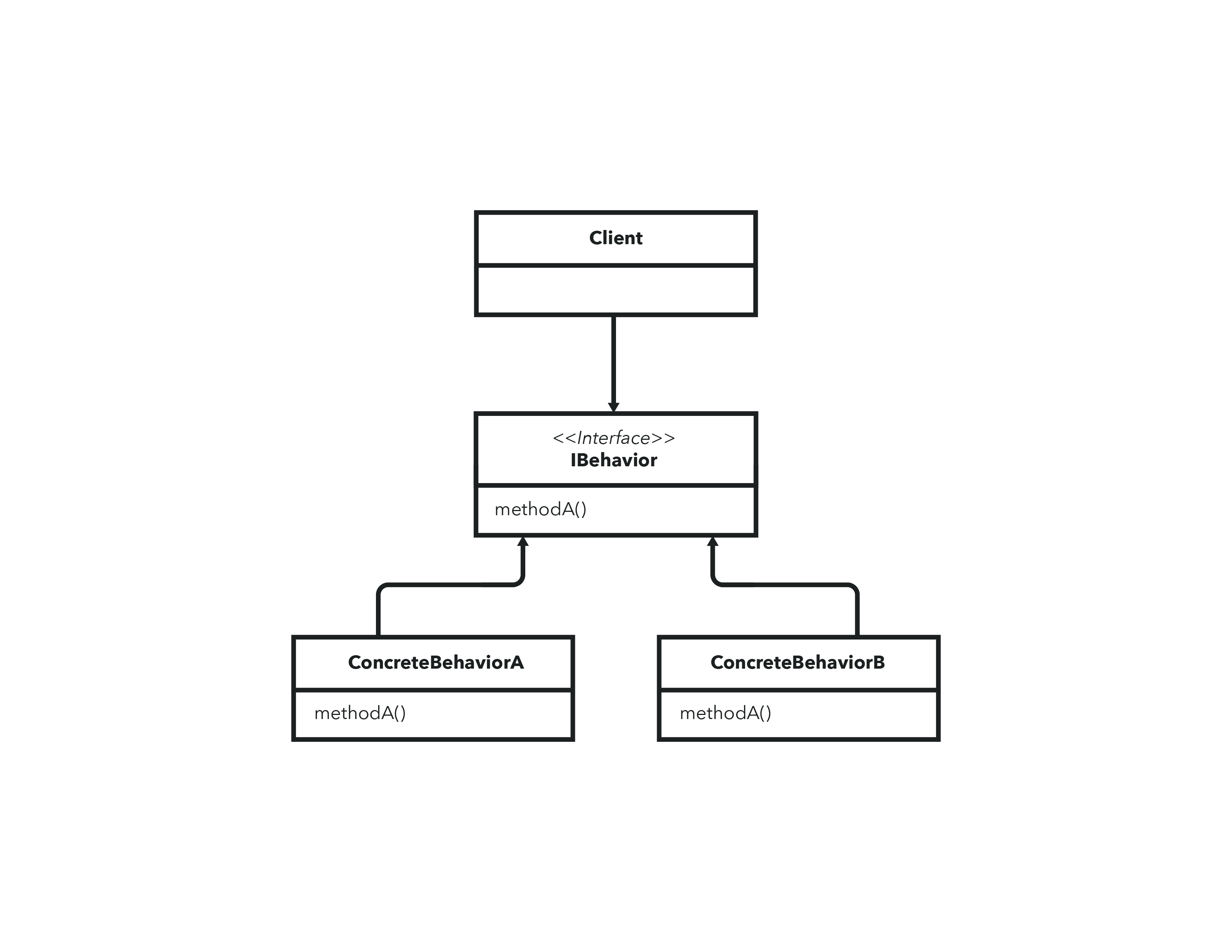 Design patterns and its application is an exceptionally worthwhile investment, despite the initial learning curve.

To ease and speed up development test automation:

Take time to understand the problem at hand and what design pattern solves the problem. Remember, constantly evaluate and identify problems to keep code clean. Needs change. Be mindful. Add a pattern when there’s a practical need for one. Sometimes the simplest solution is no pattern at all. Adding a pattern without just cause adds unnecessary complexity to an automation solution. When designing, address problems in the simplest way possible. Just keep it simple.